The Spizzwinks(?) are America’s first underclassman a cappella group. In an age before iPods or reality TV, when the only way to hear singing without instruments was in the shower, we showed the world that a bunch of college guys sporting sweet harmonies and a perplexing name was a winning combination. That’s right – we liked a cappella before it was cool!

Like all great stories, the Spizzwink(?) saga begins in 1906 in Iowa, when the state was in the oppressive grip of a massive, inexplicable Corn Blight. Inexplicable, that is, except to one man: a small-town postmaster by the name of Frank Johnson. Mr. Johnson proclaimed to anyone who would listen that the Great Iowa Corn Blight was the handiwork of an insect known as the Spizzwink, which, coincidentally, only he could see. Few took heed of his warning, and the legend of the mythical Spizzwink would have been lost, but for a young boy with a sweet voice from that small town in Iowa, whose greatest ambition was to someday attend Yale University…

Flash forward to the winter of 1913, where four Yale freshmen – including a certain young man from Iowa – met at Mory’s Temple Bar, Yale’s historic tavern, to decide upon a name for their new singing group. This new group had been created to provide audiences with a light-hearted alternative to the Whiffenpoofs, Yale’s older, all-senior a cappella group, who were known as much for their stodginess as for their musical excellence. After an evening of drinking and thinking (and perhaps more of the former than the latter), our hero glimpsed a strange sight across the table: the ghost of his old postmaster, Frank Johnson. Inspiration struck, and the young singer exclaimed, “That’s it, boys! We’ll call the group the Spizzwinks!”

Later that year, the editor of Yale’s yearbook was unsure of the spelling of the fledgling group and added a question mark in parentheses as an editorial mark. The group liked the look of “The Spizzwinks(?)” and the parenthetical question mark is still with us today.

Since our historic beginning at Mory’s, the Spizzwinks(?) have proudly carried on a tradition of musical excellence and camaraderie as one of America’s oldest choirs. With one eye towards our one hundred year history and the other towards the future, we seamlessly fuse tradition and innovation to bring audiences a unique and unforgettable concert experience. 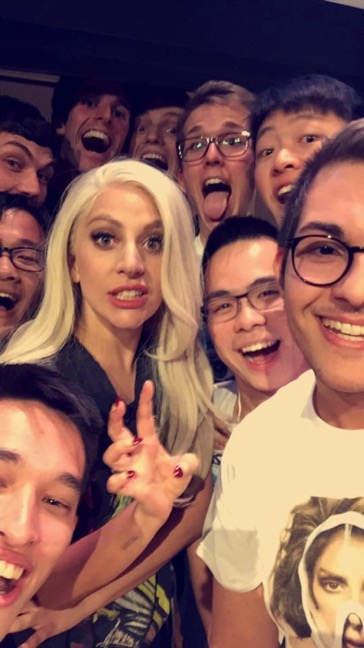 The ‘Winks and Lady Gaga snap a selfie!

Today, the Spizzwinks(?) spend their time as fully enrolled students, performing concerts all over the world during school vacations. We’ve sung everywhere from local New Haven elementary schools all the way to businesses and universities in cities such as London, Cape Town, Los Angeles, Beijing, and Istanbul.

The Spizzwinks(?) are Yale staples, performing every year at events like the Harvard-Yale football game, university dinners, admissions events, first-year orientation, and at Mory’s Temple Bar.

Being a Spizzwink(?) means loving music and wanting to sing for audiences of all kinds all around the world. It means embracing our family – our brothership as we like to call it. And above all committing to the Spizzwinks(?)’ motto: “Never don’t go.”

Four times each year the Spizzwinks(?) pack their bags and head off to explore the world. We combine sightseeing, performing, and outreach experiences to make our travels as enriching as they are exhilarating.

When traveling internationally, the  Spizzwinks(?) act as cultural ambassadors for the United States, often performing on television and radio, and at large public events. We also promote cultural exchange, singing joint concerts with choirs from universities and other organizations.

Every Spizzwink will visit all six inhabited continents during their time in the group with travel and lodging funded through our yearly performance schedule.

In addition, every Spizzwink will travel with the group to perform at least one concert in their hometown.

This is our promise to ourselves and to you.

Learn More About Our Tours